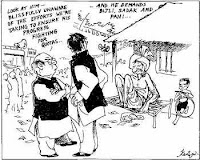 I couldn't help but smile seeing this cartoon(Courtesy: The Hindu 27th April). It aptly describes today's state of the poor and the petty politics that's being employed by our politicians in the name of uplifting them. Kudos to the cartoonist for bringing out the reality!
Posted by Manojh at Monday, April 30, 2007 No comments:

‘Relentless’ – the word that I choose to describe the Aussie performance this World Cup. You may add many more. The team deserved to win, the logic simply being, only the best team deserves to and will win. And if anyone had thought that this team was past their finest moments, they should have stepped aside and accepted the fact at least by now. The reality is that this is the greatest team that has ever played on the cricket field (from whatever cricket that I have had the privilege to watch, enjoy and comment upon). Rubbishing aside our dreams and aspirations of ‘Let this Cup be won by anyone but Australia’ that all of us were hoping for, they showed that such miracles happen only when you least expect them to happen and definitely this was not the occasion. Yet, just before coming into the World Cup, they were battered by New Zealand and England and people (myself included) jumped the gun to say that their dominance was on the verge of declination. The hallmark of greatness is to prove yourself when people write you off. They did just that. They were there to beat, to show the world that they are the best. There was no retreat whatsoever.

The sheer weight of their performances translated into thumping victories against all opposition right from game one. Going through their list of victories, it was a manifestation of what we are accustomed to from them - ‘The Aussie Spirit’. Against no team did they look even a touch rattled, leave alone the prospect of losing. Commanding individual performances broke the backbone of their opponents and when the Aussies sniff a chance of victory they wouldn’t let go of it. On a big stage like the World Cup when it mattered the most, their batsmen, bowlers delivered. No better example than ‘The Pigeon’, Glen McGrath. A stand out quality which some of the modern contemporary greats and geniuses must take cue from. Irrespective of how great a player is, his record wouldn’t speak much if the achievements didn’t help his team win. For, cricket is a team game.

Agreed, their players may not be the best when it comes to their attitude on the field and sometimes off it too, sparking unnecessary controversies through some unwarranted comments. But, who doesn’t have flaws? I feel that this is no reason to not accept this team as one the greatest ever. Interestingly, if only this team could play Clive Lloyd’s West Indies or their own Bradman’s Invincibles, would we get to know if they are the best ever. Fortunately or unfortunately, that wouldn’t be a possibility. Each of those great teams has left a legacy that’s characteristic to the era in which they reveled. Not to compare each one of them might be the better way to go about.

If Steve Waugh built the team, setting the foundation for reaching immeasurable heights, his successor has made sure they have very much reached the summit. It remains to be seen how this current team copes once their senior players, many whom are past their 30’s retire from the game. But their effective cricketing system which has and still generates quality cricketers, wouldn’t come a cropper like other cricket organizations around the world. It would continue to churn out some of the most talented players. The fact is, in Australia, the game just receives the appropriate amount of attention it should without much hype and hoopla. Cricket is cricket there, just like any other sport. Adequate infrastructure and facilities focusing towards honing the young talent has scripted the success story of their cricket. Perhaps it’s a reflection (the inverse) of the state of affairs in the cricketing bodies in the sub-continent and a few other countries where it has become more of a ‘business of brands’ with too much of commercialization playing spoilsport. It would be in the best interests of the game if cricket is treated as merely a sport. Only then would players understand the value of playing for the team instead of treating it as a ‘profession’ and as a means of making money. This applies to the cricket fan too. We should stop over-reacting to the events related to cricket. Let the game be the ultimate winner.

Play with Passion.
Play with Pride.
Play for the Love of the Game.

Congrats Australia!!!
Posted by Manojh at Monday, April 30, 2007 No comments:

Aha! Freedom to blog. Not that in anyway I was curbed before. But the so called 'guilty conscience' of mine which wouldnt allow me to blog while at office just because I have been entrusted with 'some' work finally took a back seat with my supervisor having taken a day of absence. Yet, don't ask me questions about my previous posts right here. Although I did post them from my office, I was thoroughly unoccupied then!! So I am back after a hiatus. But what to write on? Ahhhh!! The most disasterous of starts that can happen for a non-regular, amateurish blogger like me - No topic to write on!!.

Hmmm...oflate, there has been a sudden spring in my stride to attend carnatic concerts. I have never had the privilege of attending concerts of stalwarts solely because I hail from a place that attaches no significance to any art form, leave alone music. But I cant blame the poeple, for their knowledge in art is very limited. Despite that, a few talented people, who are motivated enough, do manage to learn up something and also organise some concerts. But yeah, coming back, The Rama Seva Mandali in Bangalore is performing a commendable job, a mighty service for carnatic connoisseurs and rasikas, in organising this classical music festival which has been running for over 20 days now. It happens every year. But this is my first experience to a festival akin the Chennai Decemeber season. Having so longed to have a feel of the flavour that a typical carnatic season offers and with an array of supremely talented artists queuing up, I was determined to make the most out of this opportunity. The going has been great so far. It started on a lovely weekend with Sanjay Subhramanian blazing away with the most unimaginable improvisations that I have ever heard. Sowmya, TNS Krishna were pretty good. You hear them in an Mp3 player, you hear them in a music system. But, Oh my god! The live auditorium with the booming speakers and the resonating sound is altogether a different proposition. The only thing that can stand between the rasika and the performers is AIR!! The ambience is great and add to that an intelligent, appreciative auidence mostly comprising the yester generation. Ranjani-Gayathri, the sisters stood a class apart with their choice of songs culminating with an RTP in Keeravani.
I was unfortunate to miss out on some really good ones during the weekend though when I headed home to celebrate 'Vishu' - something more special as all of us in my family met together for a festival after four long years.
A big line up of some great names awaits and it starts right from today and goes on till May non-stop. TVS, Priya sisters, Lalgudi GJR Krishnan, Shashank, Sudha, Ravi Kiran, TNS...What more can you get? A brilliant offering. My first experience with the 'Kutcheri season' is proving worthwhile indeed!
Posted by Manojh at Thursday, April 19, 2007 No comments:

The biggest names in the Tamil tinsel world - AVM,Shankar,Rajini,Rahman have come together to produce one of the most talked about movies in recent times - Shivaji, and with the director being tight lipped about the movie throughout its production phase, speculations are at their peak as to how the movie would fare and whether the blockbuster combination would be able to deliver the goods.
The music album of the movie released recently. Shankar who had opted for Harris Jeyaraj( who didnt do badly at all) for his previous movie has gone back to his old pal Rahman for this venture and Rahman has shown once again what a world class composer he is. Though not among his best creations, Sivaji's music does have some typical Rahman touches, some flashes of brilliance (Rahman could done much more is what I feel, being an ardent fan myself).
Well, Sahara by Udit Narayan & Chinmayee is easily the pick with its melodious ingredient standing out. Udit struggles to pronounce his tamil when the song touches the higher notes, but manages to captivate with his voice.The intricate use of the mridangam - so typical of Rahman is classy! The slower version by Vijay Jesudas also deserves a mention. Vijay has done well in the song performing to his limitations.
Poovava by Hariharan & Madhushree is a foot tapping folkish number, again with good chords interspersed in the later stanzas of the song. This number to some extent reminds one of the 'Ottiyanam' song from 'Arul'. A nice departure for Hariharan from his typical melodious stuff as Madhushree again struggles with her Tamil(Why do music directors do this??).
The rap number Oru koodai should interest people mainly for its lyrics. Apart from that, there is the rap done by Blazze(?)and some useful electric guitar work, which sounds like run-of -the-mill.
The intro song, Balleilakka by SPB doesn't make a great impression though.(usually the intro song in Rajini's movie does). But the fast paced nature of the song with its clattery lyrics should do the trick.
The Rahman sung Athiradee is a touch different in terms of the usual Rahman sung numbers. The rhythm and the technical interludes paint a good picture, again the lyrics should interest Rajini fans(if they are able to decipher it).
The Boss - theme, has nothing much to comment on. Music wise, its a letdown ; lyrics should infuse some interest among Rajini aficionados.(no camparison with Guru's Jaage Hain - Rahman's best theme oflate)

To sum up, the album is a decent offering(not great by Rahman's standards) and as always with Rahman's numbers these days, would get better as you hear them repeatedly. Also, Shankar should weave his magic when it comes to picturising the songs, providing an audio-visual treat. Hoping to see the album 'COMPLETE' when the movie releases.
My rating : 3.5/5
Posted by Manojh at Thursday, April 05, 2007 4 comments: 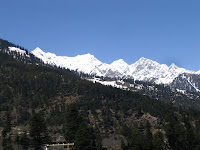 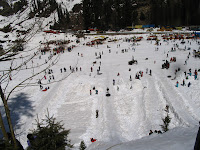 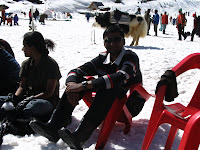 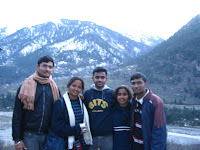 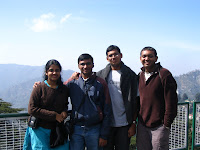 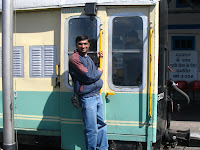 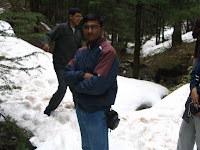 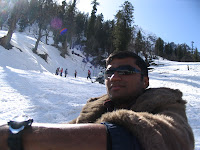 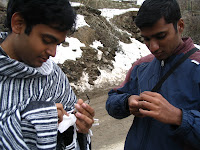 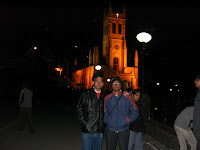 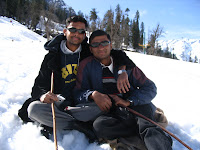 This was my first ever trip to the snowy lands. The glossy snow standing tall all around was breathtaking, the sight comparable probably only to Sachin's six off Andy caddick during the 2003 World Cup league match or the Kamboji that Sanjay Subrahmaniam sang a couple of days back :-) . Amazingly, for the amount of walking that we did, the tiredness was never felt, for the sheer magnificence and splendor of the snow simply drove away all the fatigue. Cheers to the Himalayas! Would love to be there again.
Posted by Manojh at Monday, April 02, 2007 No comments:

This is my own space!